So it's been a pretty bland couple of weeks here honestly, I haven't gotten out much since my last post but I do have another kind of adventure in the works I'd like to talk about.  For a while now I've been wanting to make a big move and get out of North Carolina and move out west and/or north, ideally up to the great city of Seattle, Washington.  I've had this idea in mind since like 2014 so it's really nice to finally be taking steps towards making it happen.  So announcing it here for the world to see, I'll be moving to Seattle by, at the latest, August of this year! 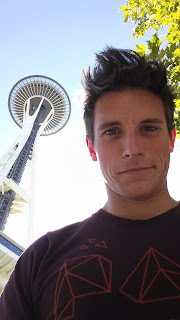 Me when I visited Seattle last August.

There's a lot of reasons I want to make this happen and a lot of them have to do with the region of the Pacific Northwest and how goddamn gorgeous it is.  I expect to get to do a lot more getting out of the house and into the woods when there's deep forest only about an hour away and gratuitous hiking trails even closer.  Maybe it's the wrong impression but I picture the PNW just being 95% woods and forest, which is exactly the kind of place I want to live.  Not to mention that I'd really like to get into mountaineering and hey what do you know, the Cascades are right there!

Another major reason I want to move to Seattle is the University of Washington.  I've been tossing around the idea of pursuing a Masters degree for some time now and UW is a great school.  I'm not 100% sure what program I'm going to study but right now I'm looking into the Civil and Environmental Engineering program to start in 2017.  "But Evan, why move so soon if you're not planning on starting for a while?"  Well there exists such a thing as in-state tuition, and in order to get that I have to live in-state (crazy!) for 12 months first.  I'm not terribly interested in being in debt for the rest of my life so eating the cost of moving sooner rather than later seems like a good fiscal choice.  Plus, you know, maybe I'll be able to save enough money for a freakin' kayak afterwards.

Anyway, it's nice to have a new major project to work on, and I'm excited for such a big change in my life.  First I have to stress out and panic about the whole process though!  A cross-country move is no joke but it is a nice adventure.  I'll be posting more about it once I have a plan of when to get there, and where I'll be stopping on the way.