I'm playing a dangerous game right now: starting to type this without a title in mind!  Let's see where the night takes us, ladies and gentlemen.  Well I know for a fact where the prior week has taken me and that is to the climbing wall, both at TRC and in at UNCG.  Last Sunday Wayne and I hit up North Raleigh to pull down some climbs and it ended up being a really good day!  A low gravity day, if you will.

Lead climbing is one of my favorite things I've picked up in the past year so I jump at every opportunity to lead with my climbing buds, however my dear friend Wayne, my go-to climbing partner here in Raleighwood, does not share this sentiment.  So when I asked if we could do some leading and he said "Okay, I guess," I was already halfway to the counter to get a rope. 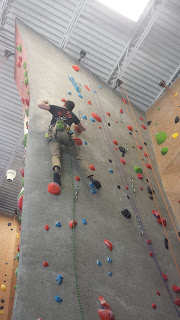 Warming up our clipping fingers on a 5.9.

Leading holds a special place in my heart because, compared to top-roping, it takes a lot more out of you mentally.  Once you're above the bolt you have to really convince yourself that it's okay to fall, even though you don't have a rope booping you in the nose every time you move.  You have to calm yourself down to keep from overgripping but all the while keep in your mind that you could take a longer-than-usual freefall if you do slip off.  Sometimes that freaks people out, understandably so.  As for me, I'm right at home with the thrill.  To me falling is a part of climbing so if you're not prepared to fly off the wall at some point then maybe take a step back and figure out why you're climbing. 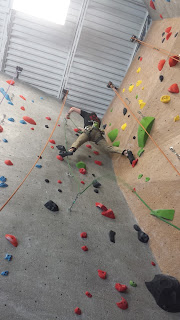 I think this would make a good action pose, but Marvel Studios finally blocked my number.

So that was a pretty neat day, we led some really cool 5.10+'s with fun overhangy bits, just the way I like 'em.  My next climbing day was carefully planned.  A series of events was put into motion, the planning of which dates back to the dawn of man.  I drove over to Derek's place about an hour away and he brought me to his gym's wall for the first time ever!  This was actually the first time we'd climbed together in a length that can be measured in years and I walked away from it tired and hungry and sore, but also incredibly pleased with the both of us. 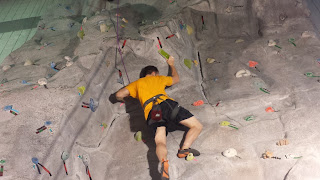 I learned a few things at the UNCG rock wall, one of which is that the route ratings between my gym and Derek's gym are not the same.  I'm starting to think that he Yosemite Decimal System was actually a series of hieroglyphs found in the national park and deciphered over the ages into a rough translation instead of the absolute numbers they masquerade as.  Basically the wall over there was a full rating tougher compared to what I was used to and I was very challenged as a result.  It was a fantastic day of climbing though with Derek and I working of several routes he wanted to show and project with me. 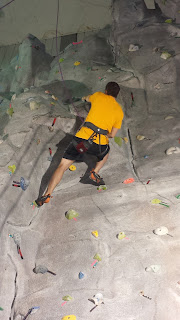 Pictured above is Derek kicking that overhang's ass.

As a further lesson I realized that Derek and my climbing gym manner are two very different approaches.  I like to climb hard for 2 or 3 hours and pop off after that for some food, while Derek likes to take his time between climbs by chatting up the other folks around and talking about the routes.  While I dismiss this as "cooling down" he insists he is "pacing himself."  And you know what, I'll respect that approach, even though he's super wrong and dumb.  Anyway when we finally left we got some wings to put a nice bow on the day.

Still trying to think of a pun for the title, let me know how I do.