Back to Concrete Walls (Of the Whitewater Center)

Its been less than a week since Evan and I left Camp Grimes and already the pressures of the real world are starting to set it. With all the stress and exhaustion that comes with working at camp each year, it truly is hard to think of my life without it; or to think of a place I'd rather spend my summers: 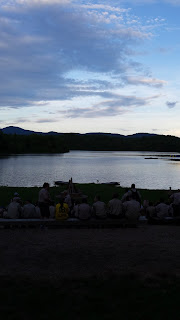 After sitting around all day Monday I started to feel like an animal locked in a cage. Despite a long list of things I need to do before returning to school in a few weeks, I could only do them at the pace the University will allow. On Tuesday the river withdrawals were so strong that I slapped my kayak on the roof rack and headed out for the U.S. National Whitewater Center. I had already mustered my Personal First Descent of both the Upper and Lower Green River, but I wanted to get back to the Center to brush up on my skills.

I started with a few warm up laps of the Wilderness Channel. The rapids were familiar to me, but far from comfortable. The concrete walls that line the Whitewater Center leave you feeling committed, while also forcing the water to be pushy and unpredictable. The nice calm eddy lines that could be found on the Green River were gone for much stronger and boiling eddy lines.

After a few laps through the familiar holes and wave trains of the Class II-III rapids found in the Wilderness Channel I thought I would feel more comfortable, but I continued to feel just as anxious as I had when I first put in the water. If not more so. Before Tuesday I had only run the Class III-IV Competition Channel a handful of times and though I was confident I could run it I had never felt truly at ease on it.

None of the individual features found on the Comp. Channel are super challenging, but there is little to no rest between them. Things start off fun with a series of holes and waves that are tight and a lot of fun. Its the second half that really tests your mettle. A series of holes, ledges, diagonal waves, and pour-overs that are all topped off with the finale, Big Drop. An 8 foot sliding ledge with a 3-4 foot foam pile due to the vertical wall on one side, Big Drop has a tendency for carnage.


There is still work for me to do at the Center. There are a few lines I'd love to run, as well as a few more technical skills I need to perfect. All I need to do now is find the time and a way to convince Evan to join me for a session in the Concrete Jumble. He got his first taste of Class III+ this summer at the Green River. Its time for both of us to fully step into Class IV.