Introducing Friends to the River!

Hey folks, Derek again. Wanted to pop on here and let everyone know what Evan and I have been up to over the past few weeks.

On July 18th, Evan and I loaded up the gear and headed to the Lower Green River with our friends Samantha and Patrick Fitzgerald. This was their introduction into whitewater kayaking and it seemed like they both really enjoyed the experience. It wasn't only a new experience for them though. It was also my Personal First Descent of the Lower Green and Evan's first time past the second bridge, and to the Big Rock Take-out. 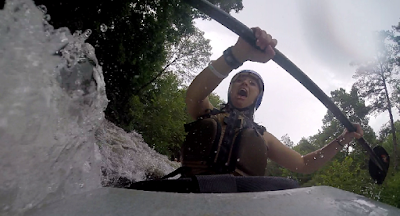 When we got to Fishtop Access the water flow had just reached that point of the river and it was clear that the hardest challenge of the day would be navigating through the fleet of tubes dropping into the water. Despite not being challenging for Evan or me, it turned out to be an amazing trip. A little less than half way down the skies opened up and began to pour on us. It was a beautiful day! 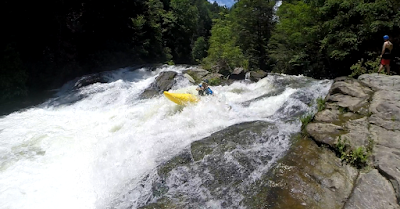 This past Sunday Evan, Adam, and I decided to re-tackle the Upper Green. Samantha ended up accompanying us, ready to take a big step up into the world of whitewater kayaking. The day started off somewhat stressful. If my father and sister hadn't been there to help us shuttle cars we would have missed our window. I could tell the water was dropping just in the time it took me to follow Adam into the river.

We pushed hard and fast early on to get in front of the water. I think the pace Evan and I were trying to set may have been a little rough on Adam and Samantha, but they held up pretty well. Despite a couple of swims on his First Descent of the Upper, Adam maintained confident and did extremely well. He also managed to paddle Pinball successfully! Samantha and I tackled Bayless Boof together, her first Class III+. Admittedly I didn't give her much of a confidence boost before we started down the 10-14 foot drop (top to bottom), I merely told her to follow right behind me and didn't give her time to think about it.  I think our pace ended up wearing her out physically and mentally, so by the time we reached Pinball she chose to portage. I think this trip was a learning experience for the four of us. It hopefully gave Adam and Samantha more confidence on the river. It reminded Evan and me that we need to plan for enough time so that we could offer proper instruction, instead of just dropping in and going for it.

(Samantha after her first run of Bayless Boof.)

The low water on the Upper was pretty fun though. It made the run a lot more technical than it had been in the past. The water level made a the lines tighter and a few were even non-existent. The time limit was also interesting, as it made it so we didn't have time to play on the two bigger rapids, Bayless and Pinball. It also forced our pace; we barely made it to the take out as the water dropped below runnable around us. I am very proud of both Adam for coming back to the Upper Green river and conquering the rapids that gave him trouble the first time. I am also extremely impressed by Samantha for going down the Upper Green as her second whitewater trip and making it down with such tight lines.