As I sit typing this post, I have a bag of ice tied to my knee. It would appear as though even I am subject to feel the effects of atrophy and age. A month or so I began jogging in order to get back into shape (from a conditioning point of view). On Wednesday, when I had energy to spare I jogged much longer and further than I have all year. After seeking advice from a sports trainer, I believe I am suffering from tendonitis in my right knee.

I had wanted to write about injuries for a while since I think they are an interesting subject. Obviously we should be trying to prevent and avoid them as much as possible. Unfortunately we are frail creatures and injuries are inevitable to some degree. There are many intangibles that we have no control over that can lead to minor or even serious injuries. Like this past April when I was kayaking at the USNWC, when a wave knocked me back underwater and up against a rather large rock right after a successful roll attempt. I ended up bruising and scraping my hand up pretty badly. 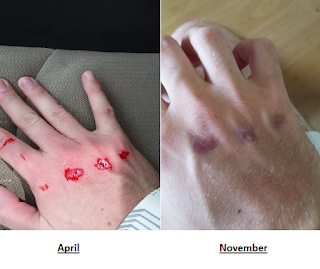 Since then I have lost count of the number of people who asked, "Who did you hit?" It got to the point I wanted nothing more than to respond, "The last moron who asked me that question!" Having to repetitively answer questions regarding how I sustained injuries had been my biggest incentive growing up to avoid them at all costs. Over the past year I have realized these questions can be a great springboard for telling someone about an activity you are passionate about. It’s not lost on me that to many people, someone pointing at a purple hand that's covered in blood is probably not the most enticing advertisement, but for some the passion of others who do something despite inherent risks can be extremely appealing.

So I plan to, and hope everyone, continues to prevent and avoid injuries as best I can. I have used the scars on the back of my hand as a reminder of what can happen when I get complacent. But when life gives me no other options, I plan to use my injuries as a platform to promote my passions instead of a reason to hate a complete stranger for showing concern.