When Evan and I decided to start this blog, one of the easiest decisions for us was to name it “Creeks & Crags”. The name embodied the cores of our values and was a great showcase of our passions within the outdoors. Ever since we began uploading the earliest of our content I feel like we have certainly lived up to the “Creeks” aspect of our name. Unfortunately, I deserted Evan when it came to the “Crags” aspect. That is, until last week.

Two weekends ago, a guy named Mike came into our store and asked me if we sold climbing gear. After the unpleasant task of informing him of our complete lack of such gear, we sparked up a conversation about our own experiences in climbing. We ended up exchanging numbers and hitting up the climbing wall at UNCG later that week. This was pretty much my first time on a climbing wall. My hand and forearm muscles were quick to remind me of that fact! I was only able to send a couple routes before a desperate dyno sent me hurtling off the wall. (*Dyno: A move where the climber typically has both feet come off the wall to reach a hold that would otherwise be unreachable.) 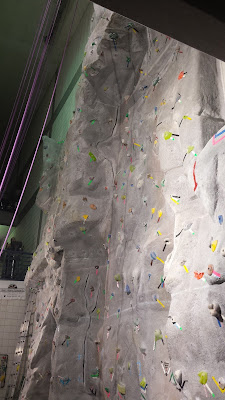 It felt great to be back on the wall. I've climbed maybe once every year or so since I was 13. What felt even more amazing was the chance to Top Rope again! When I have gone climbing in the past couple of years, I have mainly stuck to bouldering since I have been forced to go solo. It is also a style of climbing that has meshed with my physical conditioning. Even in the peak of my fitness playing soccer and running track, I was a sprinter and lacked any motivation for endurance running. Like my father always says, “If you have to cross the finish line more than once, you’re running the race wrong.”

One of the greatest hurdles I faced when tackling the Wall was having confidence in the rope being there to catch me if/when I fell. I have never been overly scared of heights, but I do respect them. I ended up becoming sluggish in some of my movements as I made my ascents and ended up wasting a lot of energy being indecisive. It was a great workout and Mike and I plan to make it back to UNCG wall within the week.
Posted by ApeironLight at 23:17