We are already three weeks into the new years and I am feeling pretty good about it so far. No grand adventures have been had, yet. They are coming! Right now I am currently in the planning and conditioning stage. One of the most important things, I have learned, is to be in the best physical conditioning you can be in order to avoid injury. I have been back in the gym and walking/running a lot more often lately. I also have been playing Disc Golf quite a lot, which I have found to be very good for low impact conditioning.

Also, this past weekend I drove down to Cedar Falls, NC to scout out the section of Deep River that runs through there. There was supposedly a very short Class II-III section that runs through there when the water was flowing, which it was that day. I parked my car in a conveniently located empty parking lot and made my way down to the river. Unfortunately, what I found was a lot of privately owned land that I didn’t really want to go tramping through. (I have heard and seen a lot of fisherman and boaters talking about walking along the island that splits the river once I got home, but I felt uncomfortable doing so.)

Walking upstream I eventually made my way to Theater, the lower set of rapids on Deep Creek. I climbed up on a very large boulder in order to get some good shots: 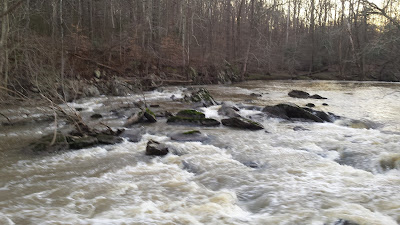 As I continued to make my way upstream I found quite a few small play spots and an insignificant ledge or two before finding where the river opened up a little more. From where I was standing I couldn’t tell exactly which rapid was which; I am unsure if these pictures are of Camel Gate or Southpaw, but they both look like a blast. (At least for as far away from the Mountains as they are.) 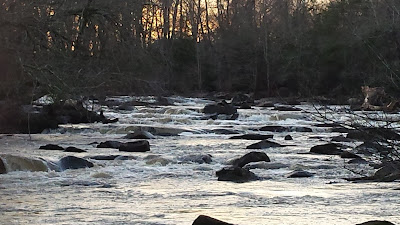 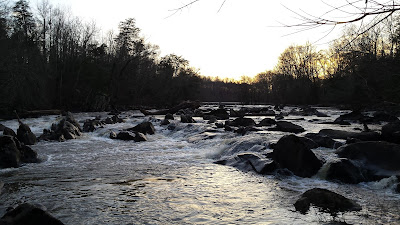 Hopefully I will get another chance to scout out this section of river soon, sometime after our next decent rainfall.In the meantime there is some snow on the ground and I am really regretting not bringing my kayak with me, so I will be looking into bringing that up here soon while also taking a look at some of the rock walls in the area.
Posted by ApeironLight at 17:25